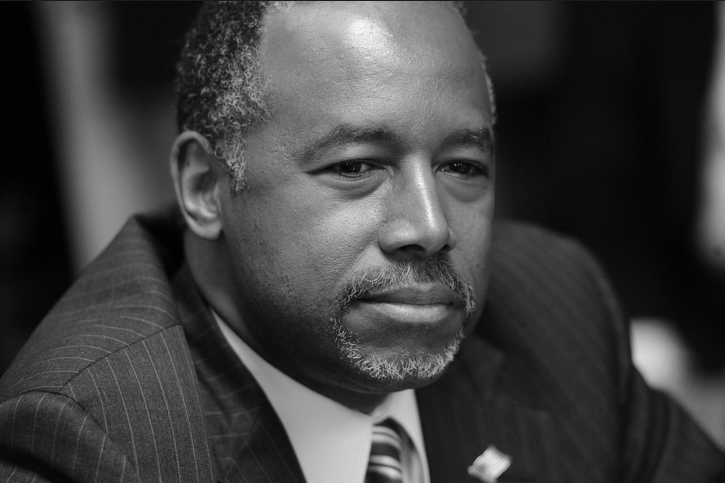 Ben Carson should never be president

Is it because he’s a political infant? Never held a public office?  Ignorant of the delicate chess game of foreign policy?  No skill at interpreting the geo-political landscape?  Lack of business experience?

Ben Carson should never be president because he is too good.  He is elegant and eloquent.  He is stunningly articulate in the sense that he doesn’t point at you with just his thumb like every other politician since Bill Clinton (when he was lying to us about Monica Lewinsky) and tell the American people—in carefully scripted sound bites designed to be repeated, replayed, and rehashed—just why his …um …ideas are bigger and better than the next guy’s.

In short, he does not engage in a political pissing contest.

Instead, he tells you of his love for this country, his hopes for its healing, and the promises of its future just as if he were sitting across from you at the dinner table.  During his brief but powerful turn at Thursday night’s debate, I half expected him to ask someone to pass the butter. His rhetoric was poetic, not political.  Common sense never sounded so lyrical yet so, well … common.

He is a gentleman.  A gentle man.

Ben Carson should never be president because of what the media would do to him.  In case you haven’t been paying attention, the media have this curious knack for taking something that is good and pure and honest and turning it into a twisted circus of lies and suppositions, ignoring the good stuff about a person and instead finding any small rent in the fabric and ripping it to shreds.  No longer is the media about presenting opposing viewpoints; there’s no bank for them in that.  Instead, they only look for the ugly, calling it “good journalism”.  I call it muckraking.

No, Ben Carson should never be president.

Even though Ben Carson is what our country needs to bridge the massive divide between right and left, between those who want to perpetuate this country’s dependence upon our bulging and bloated behemoth of a government and those who would like nothing more than to line up the Washington elite in front of a firing squad, he should never be president.  Even though Ben Carson could heal the wounds of those who live on the fringes of society by drawing out of them the goodness that runs through their souls and the potential that lies within them, he should never be president.  Ben Carson would not bloviate like a lunatic, nor wring his hands in desperation about border security; neither would he look the other way nor look at who to blame or blame a YouTube video for the fact that Isis has come to town.  Instead, he would attack, with surgical precision, the crisis at our borders and eviscerate like a cancer the terrorism at our doorsteps, dealing with it like a man.  In matters of life and death, Ben Carson doesn’t concern himself with who he might offend by calling a spade a spade.

Even though Ben Carson is what we need he would never last long enough to make our country work again before the media would destroy him.

Maybe now is not his time.  If that’s the case, I’ll try to be patient and just pray that while we wait that we don’t end up like a fallen tree on the bank of a great river, its roots fighting to remain tethered to the earth—still living, still bearing fruit, and still able to reach its potential, but instead becoming unmoored from its tenuous anchor and floating out to sea only to become a mere shadow of its former majesty.